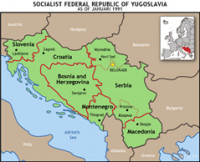 Dave Bentzin, Irene Ludwig, and Gerry Forney went on a 16-day rail journey to ride as many of these old rail lines as possible. They visited the capitals of the six former Yugoslav republics (along with Kosovo), and several World Heritage sites.  This trip was a great adventure in a little-visited part of the world, and they are looking forward to sharing pictures and experiences.

Abstract: World War I began with the assassination of Archduke Franz Ferdinand in Sarajevo, Bosnia.  At the end of the war, Yugoslavia was created in 1918 by combining Bosnia, Croatia, Macedonia, Montenegro, Serbia, and Slovenia.  Josip Broz (Tito) ruled Yugoslavia as a communist country until his death in 1980. After a series of ethnic wars, Yugoslavia broke up in 1992, and the national railroad system also broke up.

RSVP This email address is being protected from spambots. You need JavaScript enabled to view it.

Find Out What's Happening at WGA

Thanks to all our valuable WGA Sponsors! Are you interested in advertising with WGA. Learn how.